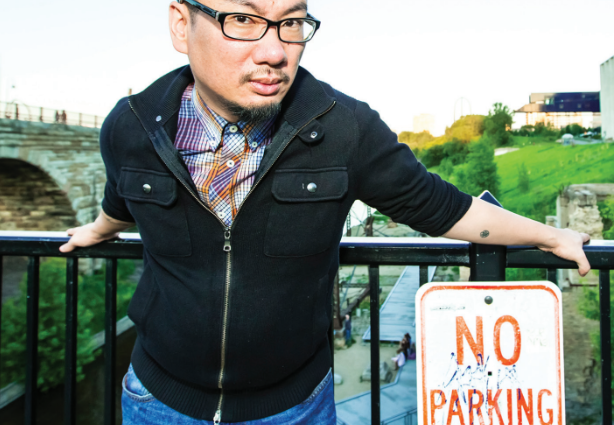 For the last five years I worked at a youth writing center in the Twin Cities, and one of my favorite parts of that job was watching kids fall in love with books and stories—whether it was ones they wrote or ones written for them. One of my favorite books in our library was Julián is a Mermaid, by Jessica Love, a story about a young boy who desperately wants to be a mermaid, and a grandmother who helps his dreams come true through dress up. One boy at our center would repeatedly take this book into a corner and read it to himself, sometimes despite disapproving looks and comments from his older brothers. He saw a possibility in that book that clearly resonated with him.

That ability to create new models of representation, new possibilities for young people, has pushed many local authors of color into the children’s literature or “kid lit” genre. Joining the “we need diverse books” movement, these authors are bringing stories to life that they want their kids to read, that might not otherwise be told. (It’s worth noting that Love has faced criticism within that movement because of her own position as a CIS white woman).

Bao Phi is one of our local literary treasures. He has written three children’s books, the first of which, A Different Pond, was just brought to life at Stages Theatre. Phi found that his background in poetry was helpful when writing books for kids.

“It’s similar to spoken word in that, refreshingly, you have to acknowledge that the audience is in some way a part of the process,” he says. “I think sometimes adults writing for adults can have this conceit where they’re writing for some universal eye, or towards some type of universal excellence, that may really just be straight white upper class elite intelligentsia. But writing a picture book, to me, is like focusing on writing one poem intensely for months.”

For Phi, acknowledging that the audience is part of the process has meant being pragmatic about how to deliver social justice messages in a way that is actually appealing to kids—starting with his own. “My kid is very receptive to a lot of social justice issues and world politics. But all things considered, if my kid walked into a bookstore and saw one of my books next to a book about farting cats, they’re going to pick the one about farting cats. So how do you get kids interested in reading a book about these things, which can sometimes feel like work, but is necessary for their thinking and development?”

Phi’s books have been incredibly successful with messages that resonate with both kids and adults. A Different Pond went on to win the Caldecott, one of the top prizes for children’s literature. And Phi has worked to bring other local authors of color into the genre. While he was longtime program director at the Loft Literary Center, he created the “Mirrors and Windows” program (the title comes from a classic talk on children’s literature that says the best books give young people mirrors to see themselves, and windows to see other identities). That program came about because Dr. Sarah Park Dahlen, who he co-created it with in 2018 (and who Phi refers to as the “diversity jedi of kid lit”) had pointed out that there were 11 published kid lit authors in Minnesota who were not white. The two wanted to tackle the challenge at the root of it by training more Native American, Black, Asian, Latinx, Arab, Middle Eastern, and Pacific Islander authors in both the art and business of children’s literature. So far the program has trained almost 50 aspiring local writers.

Phi just published his third children’s book, You Are Life, which was written during COVID and the upswing of visible anti-Asian violence. Phi says, “as a dad, I wanted to resist the nihilism, despair, and anger, and so I wrote this book for kids that is more about uplifting them, despite the circumstances.” The book is a beautiful poem about resisting invisibility and embracing complex identities. And, of course, farting cats.

Top 5 kids’ books by local authors you need to give a young person:

When Everything was Everything, Saymoukda Vongsay

From the Tops of the Trees, Kao Kalia Yang

You Are Life, Bao Phi

Being You, Alexs Pate