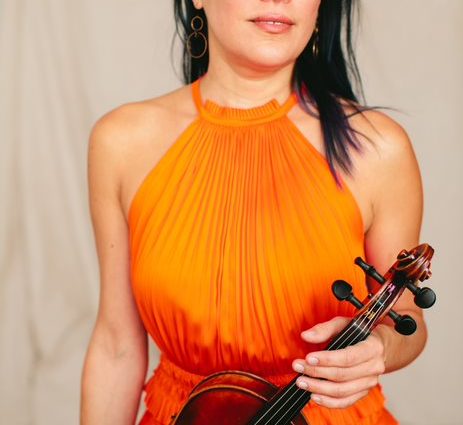 Even if you studied music past your middle school classroom, you’ve probably only heard symphonies by a few renowned composers—and they are most likely white, cishet men. Saint Paul Chamber Orchestra (SPCO) Violinist Maureen Nelson has been chosen to change that, with her new appointment as Assistant Director for Programming and Projects.

The SPCO created this new position for researching and exploring repertoire by underrepresented composers and facilitating the SPCO’s ongoing efforts to diversify its programming. It was also created to support a major part of SPCO’s mission: to continually strive to provide all people in their community with opportunities to connect with the music they perform. Nelson, in her role as assistant director, will focus her work on composers of color, women, and nonbinary composers.

This role is designed as a two-year, part-time staff position open to tenured members of the orchestra. And SPCO has led the way for musician leadership in the United States: the artistic director position was the first in the country to hire an active member of the orchestra. Nelson will be working under Artistic Director and fellow violinist Kyu-Young Kim, who was appointed as director in 2016. The assistant director role builds on this newfound legacy; musician leadership creates a collaborative culture between orchestra members and administrative staff, allowing current experience to pave the way for future repertoire.

Nelson will share researched works with colleagues on the musician Artistic Vision Committee (AVC), and advocate for the inclusion of these works for each SPCO concert season. “I’m incredibly excited for this opportunity and grateful to The Saint Paul Chamber Orchestra for giving me the space to dive deeper and further enrich our programming choices for years to come,” says Nelson. Nelson has curated a program for the 2022-23 season featuring her own work as a composer and arranger, and the music of Gabriela Lena Frank.

Originally from Pennsylvania, Nelson began practicing music as a child when she picked up a toy guitar and started playing it as a violin. At 12, Nelson entered Curtis Institute of Music shortly after attending Temple University’s Center for Gifted Young Musicians; at 16, she appeared as a soloist with the Philadelphia Orchestra. From there she went on to study abroad in Germany, lead the Grammy-nominated Enso String Quartet for nearly two decades, and played around North America and beyond. Since joining SPCO in 2016, she has often been featured as a soloist, lead, and chamber musician.

Kim said recently that Nelson “is not only an extraordinary violinist, but an intensely curious musician and a naturally collaborative team player. She has a deep understanding of the SPCO’s unique artistic model and how to lead from within the ensemble. I look forward to working with her in her new role.”

When you go to one of the finest chamber orchestras in the world, like SPCO, you should be able to hear the music, emotions, and artistry of all of those who make up your community. This year, listen closely for the growing works of SPCO through Nelson. Maybe you’ll hear something and be reminded of yourself, or other music lovers like you.

You can watch some of Nelson’s beautiful performances at the SPCO Concert Library, and support Saint Paul Chamber Orchestra’s inclusive programming at thespco.org.

END_OF_DOCUMENT_TOKEN_TO_BE_REPLACED

Your indispensable guide to a complete wrestling experience.

END_OF_DOCUMENT_TOKEN_TO_BE_REPLACED

Don’t Call It a Gift Guide

But, well, it is a great way to find gifts.

END_OF_DOCUMENT_TOKEN_TO_BE_REPLACED

The once-derided shoegaze genre is finally getting its due with a new compilation from Third Man Records.