Stuck inside the emergency vet with the sick-dog blues (again) 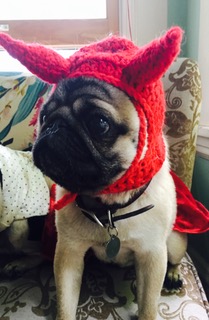 Jerry Seinfeld once said something to the effect that dogs find all the best stuff at ground level—the problem is they don’t have pockets to store their finds for a later date. Lacking impulse control, it’s best in their minds to just eat whatever they see laying there at their unique vantage point. Despite this smorgasbord philosophy, never once has one of my cats or dogs even offered to chip in on the squillion-dollar emergency vet bills for these misadventures.

Some staggering statistic involving the root-cause mystery of an unwell dog is usually predicated on this question: “Did they eat something unusual?”

Uh, well, they’re dogs, so I’m going with yes. Fer crying out loud, random trash consumption is listed under Special Skills on all dogs’ resumés. Retrieving things out of my dogs’ mouths has become a full-time job. (Later, we can cover the topic of pulling things out of a cat’s ass, such as tinsel on Christmas morning. I blame all children’s books illustrated with a cat gently playing with a ball of yarn.)

As animal parents, we quickly learn the long list of potential deathtraps that decorate our dwellings. I came out of the womb with the knowledge that chocolate is poisonous to a dog.

Rubber bands, tampons (not usually on the living room floor, mind you), string, ribbon, cellophane. Think of an everyday, inanimate, and otherwise benign object you’re too lazy to pick up in the moment, then imagine the offending object getting twisted around your baby’s intestines like a tourniquet.

I thought I was well aware of the standard primary risks—until I adopted Mr. Cheswick, that is. At nine months of age, he ate a bolt of upholstery fabric. Cheswick had been sliding under furniture and goofing around as a pup on the regular. Of course, what we didn’t realize at the time is that the thin fabric lining that all sofas and chairs have hidden underneath their bottom sides is, apparently, dee-lish. I was too busy being scarred by his insatiable appetite for scarfing the bindings of my favorite books to investigate his fascination with dicking around under the couch.

Sitting and waiting at the emergency vet is not delightful. People try and keep focus to their own fur child, occasionally looking up as a new hysterical human comes in with their particular fur emergency. This doesn’t feel like the time or place to make chit-chat—this is not National Night Out. We’re all here in the waiting room fighting tears, scared out of our wits, and most of us are already panicked about the impending bill.

“What’s wrong with your dog?” is an innocent enough question to ask; however, my first impulse is not to answer civilly, but rather to stab the unsuspecting asker. Now add a line jumper to this nervewracking equation. We all are familiar with the rules of after-hours animal care: First come, first serve. Life-threatening cases jump the line. We’re merciful when it comes to those pets and their owners. If it bleeds, it leads.

However, this one particular buttinski kept repeatedly checking into the front desk, loudly asking how much longer for her dog to be seen. She even offered to answer the front desk phone, hoping that her willingness to do someone else’s job would somehow make her a special case. I felt sorry for her dog. She was a lemon.

I had already unfairly sussed out her pooch as a non-life-threatening patient. He was occasionally scratching his ear. She had already been scolded for letting Itchy offleash to wander the waiting room. Plus, I was here way before her, cradling a shaking Mr. Cheswick who hadn’t eaten in a day, was throwing up black bile, and nearly tipped over just trying to stand.

The thankless position of the front-desk staffer is particularly fascinating to me, as their job seems unthinkable and a great reason to do drugs. Checking in freaked-out people, answering the constantly ringing phones, running back to the exam rooms. There should be a little something extra in their paycheck for that kind of stamina.

Just like a human hospital, finally your name is called, and you get to wait in the smaller room for a lifetime. At least behind a closed door, you can let it rip. Cry, console Mr. Cheswick, and bitch about the head case who thought she was waiting online at Studio 54. Sure enough, first question out of the vet tech’s mouth: “Did he eat something out of the ordinary?”

Never in my wildest imagination could I guess exactly what he’d eaten, but given his proclivity for literature, anything was possible, so I answered I didn’t know for sure. Just feeling his little belly, she instinctually knew there was something lodged in there that shouldn’t be. All I could think of was Curious George Goes to the Hospital—the caper in which the naughty little monkey ate a puzzle piece. I consoled myself that story had a happy ending. Where is my big yellow hat?

Uncertainty and inconclusive tests push me to the brink of asking the unthinkable. If he was your dog, what would you do? Liability aside, please tell me what to do! I can’t think of many instances in which my mental health is dependent on someone telling me what to do. The vet’s humanity showed through when she said, “I would get him into surgery immediately to find out what is in there.” Unlike Curious G, the X-ray didn’t show a perfectly intact puzzle piece. Best they could determine pre-surgery: A wad of black substance. Great. That doesn’t sound at all scary.

All day I was dry-heave nervous waiting for the post-op phone call. Finally, word came he was out of surgery and ready to come home. The surgeon was never able to identify the black mass, but if they’d offered, I would’ve taken it home with me and done my own lab pathology.

Turns out, I didn’t need to. Arriving home with a sleepy Mr. Cheswick, I instinctively got down on the floor and hoisted myself underneath the furniture. There were only fragments of that black fabric still clinging to the bottom of my 86-inch-long sofa. Mystery solved.

Let this be your cautionary tale. Do not let your dog off their leash at Joann Fabrics, no matter their potential to become the next Alexander McQueen!