Other Skies Weird Fiction Will Bend Your Imagination 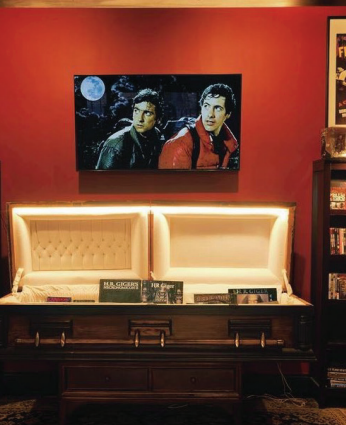 Josh Hames had a lot of horror books on his hands, and the booksellers he was spending time with were giving him the elbow. As in, we’re not getting any younger, ya see, kid? “My collection—It was in control, and I was not,” Hames says. “I was more its captive steward.”

So when the opportunity came up—he and his fiancé, Becca Olene, scoped the location by driving by at midnight—to sign a lease for a historic brick building in West St. Paul, they said yes.

The third-gen print media designer renovated the ground-floor storefront himself, creating a shop that also feels like an imaginative fiction Library of Congress with rare, out-of-print, first edition, and otherwise special books.

Not that he didn’t have detractors, who didn’t get the grand business plan of a brick-and-mortar bookstore featuring niche subject matter. “But there’s a permanence with objects, especially ones you read,” he says.

And, he adds, horror and other imaginative fiction is maybe key to helping us process our current world.

“For every type of feeling you can elicit, the two that never age are awe and fear, because they’re kind of the same thing,” he explains. “The shelf life of a scary story is infinite, in a way, even if it’s not necessarily scary all the time. Some of it can be very moving, very touching, very personal, with a haunting element….When you read a scary story, you are like ‘I conquered this!’ It’s a way to confront fear in a safe way.”

Plus, these types of fiction books can help create new frontiers of exploration, creative solutions to confounding problems, and more. “With genre fiction, there are certain elements that create an invitation to bend the imagination in a different direction,” he says. And for better or worse, horror reminds us we’re not alone. “Horror fiction does that in two ways,” he says. “One is a positive affirmation, like someone holding your hand. The other is feeling that hand touch your shoulder. If you’re terrified of something that is not real, that is a rare thing to do in such a connective world.”

Like his odd subject matter, Other Skies has unusual hours (and ones by appointment) so check that before you head over…if you dare.